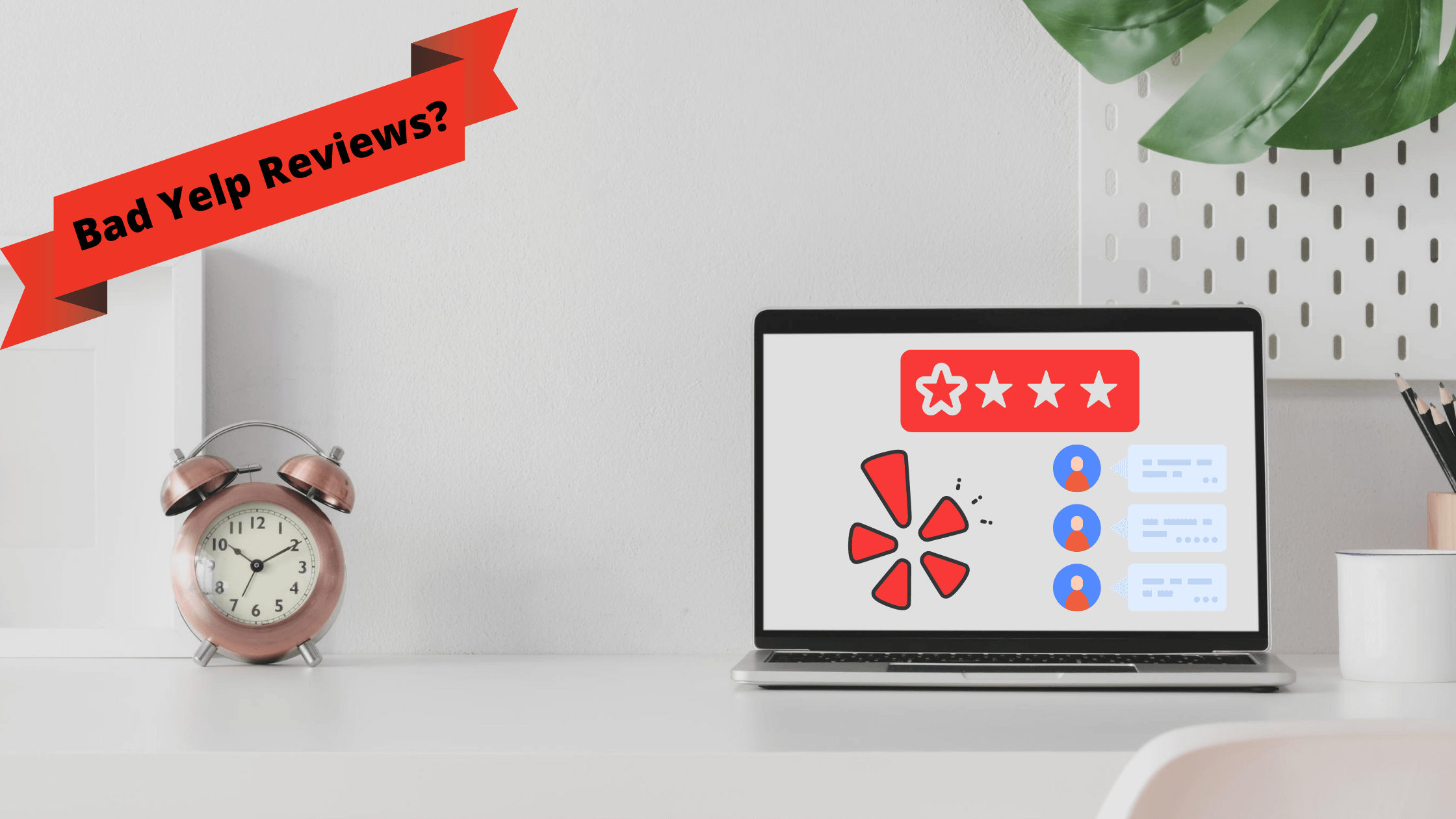 How to Remove Bad Reviews From Yelp?

Business owners who have a rating drop on Yelp can also see a sales drop shortly after.

Yelp is a popular online platform attracting many people to check out reviews and information about local businesses, salons, restaurants, etc. It provides a wide range of scope to budding business owners and offers tremendous growth opportunities.

A recent study showed 97% of Yelp users successfully purchased from a business they found on Yelp. In another survey conducted in 2014, Yelpers posted around 26,380 reviews per minute on the platform. Businesses that have experienced some negative or fake reviews may be wondering, how to remove bad reviews from Yelp.

For any local business, it's obvious that Yelp matters. In this article, we will discuss how to remove bad reviews from Yelp and how to boost your rating.

How to find out who wrote a Yelp review?

Some reputations suffer due to negative Yelp reviews present on the platform, affecting the businesses' scores and ultimately boiling down to an overall loss. Not just customers, sometimes the competitors leave fake reviews about other platforms to destroy their reputation and get an edge.

It helps them in stealing the customers of competitors and making profits. Hence, it is imperative to remove bad yelp reviews so that any underhanded competitor cannot get an undue advantage.

To find out who wrote a Yelp review, click the profile of the reviewer. You can then see personal details about them such as other companies they have reviewed, where they are located, and photos of the person. 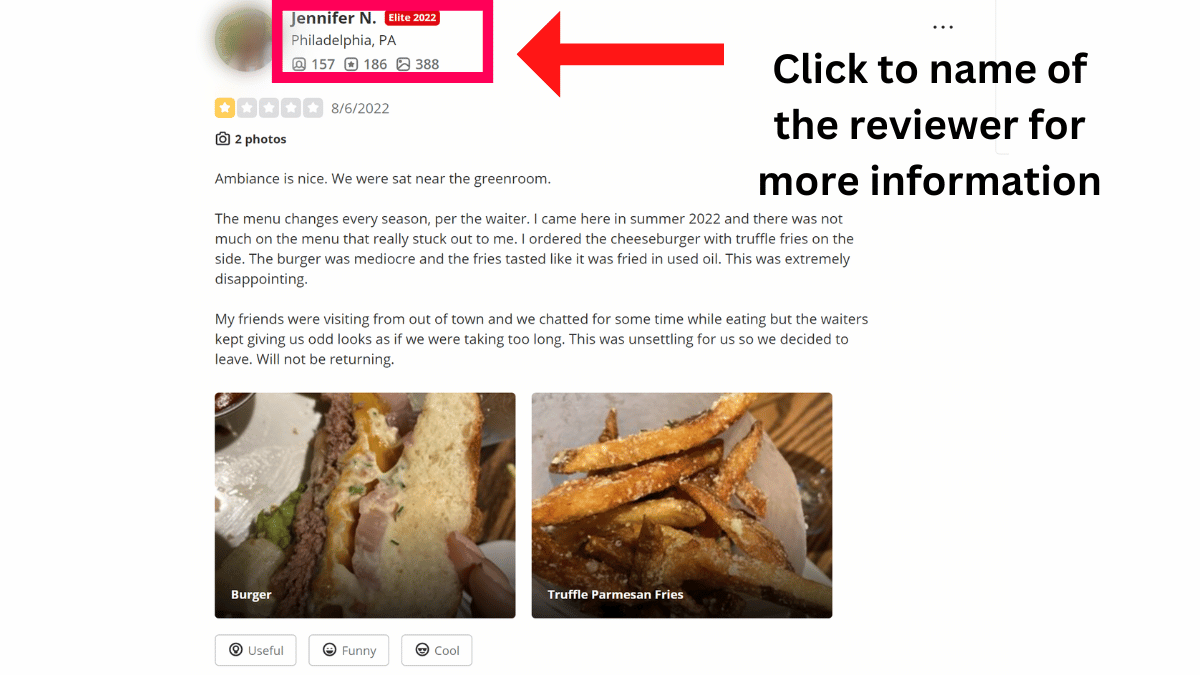 If you do not recognize the name or they are located far away from your local business, this may be a fraudulent review. 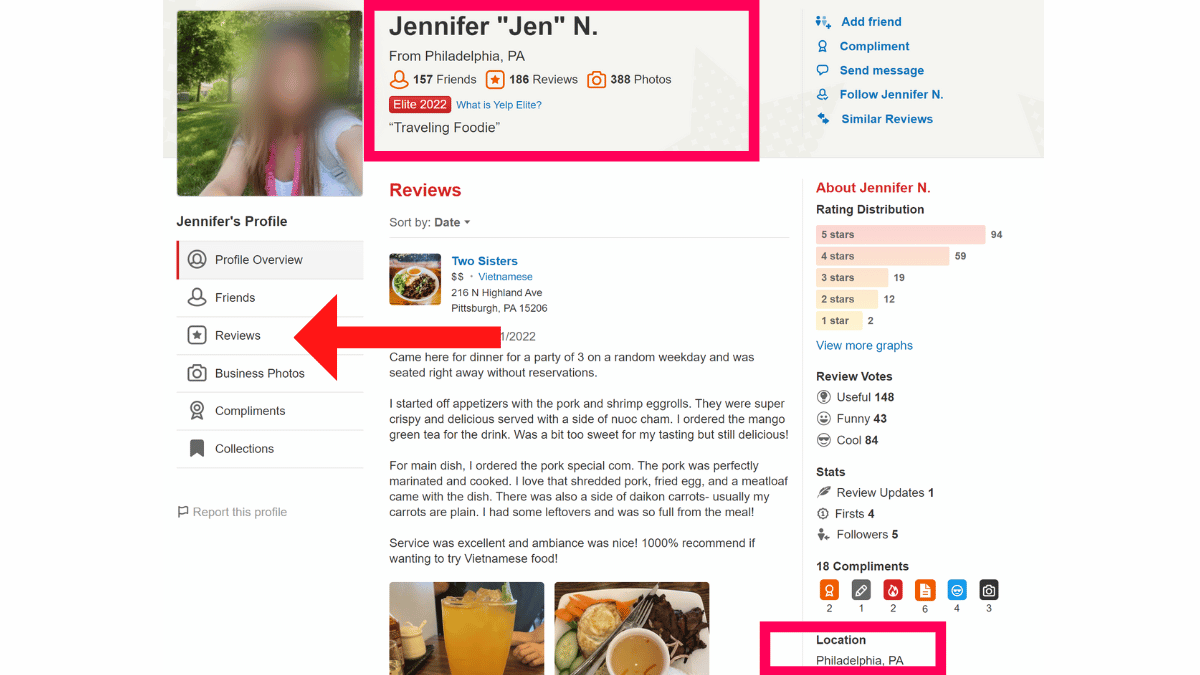 How to Spot Fake Yelp Reviews

Even with the Yelp filter on work, some fake and false reviews somehow slip through the cracks and start deteriorating the business's image. However, one should know how to spot and report counterfeit reviews to keep themselves safe from competitors and such sleazy acts.

The following are the red flags that can help one sniff fake reviews instantly:

After employees are fired or mistreated at the workplace, they try to get back at the organization by leaving bad reviews with fake profiles. Often, disgruntled former employees are found to be the source of misleading and fraudulent reports. They try to slander the business for the sake of taking revenge. One should look out for such signs, and also look into the job review sites to get to the depth of matter from one's end.

The business competitors can also leave nasty reviews on Yelp to snatch the customers of the rival. It is also a common occurrence to slam the business of others and garner more potential customers. Many times people pay others to make fake profiles and leave negative reviews via made-up accounts.

Customers can also make honest mistakes. An unsatisfied customer can get confused between the names or pages of two businesses and end up leaving a negative review on the wrong business page. It can happen accidentally but is still capable of fulfilling the purpose of sabotaging one's business.

How to Remove Bad Reviews From Yelp

Only original authors can remove legitimate yelp reviews. If a business wants to remove a Yelp review from the source, they will need to solve the customer’s issue and ask them to update their rating. However, this is not the case with fake or false reviews.

Business owners can take the following steps to report a review to Yelp.

The first and foremost step is to claim the page on Yelp to respond to the reviews. Only after the claim can one reply to the fake reviews or report them to Yelp.

There is an option on Yelp to flag the reviews that violate their content guidelines or the TOS (Terms of Service). You should flag reviews or reach out to the support team at Yelp and file a complaint. Subsequently, steps would be taken by the team to deal with the matter. Yelp support will issue a decision in 48-72 hrs after reporting the review. 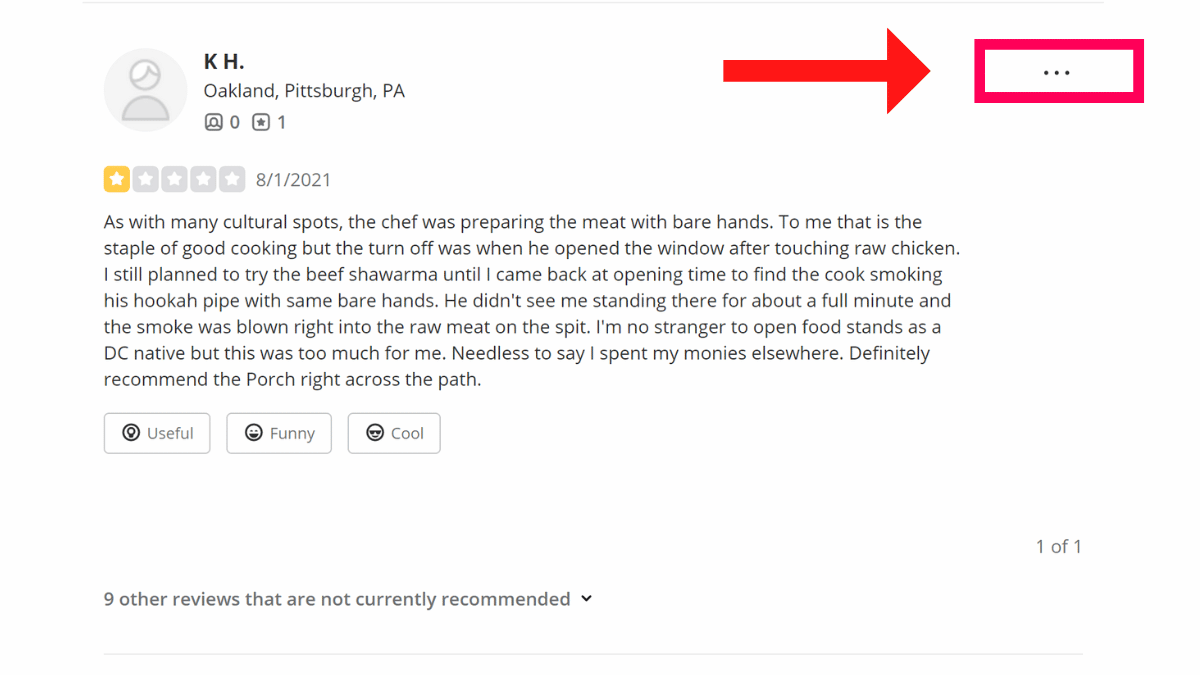 One can also take legal action against such acts. A bad review can be considered defamatory if it states false facts that harm the reputation of a person or business. If the statement can be proven to be true, the business will be on the hook for the legal fees accrued by the reviewer.

You should always try to work it out with the customer before taking legal action.

Working with a reputation management company can provide the resources to focus on fixing bad reviews, while you focus on growing your business and providing excellent customer service.

The review filter of Yelp hides irrelevant content on its own. Yelp is like other platforms that fetch reviews from people about businesses. It has also set some content guidelines that decide the kind of content that can flow on the platform. Especially for words that would be filtered out. The Yelp algorithm analyzes the reviews coming from people and hides or removes those that violate the guidelines.

Yelp claims they filter out hate speech, threats, obscenity, and bigotry to discourage the flow of harmful content on the platform. However, most of this content will get past the filter unless you report the review to their support. In the past, Yelp has been accused of extortion and making customers pay them to remove reviews on their business page.

Recently, Yelp has added a section for “reviews that are not recommended”. This hides reviews from users that are not established reviewers, experiences that are not detailed, and reviews that Yelp finds not useful. There is no definitive proof that Yelp hides positive reviews in this section unless you have a paid sponsorship. 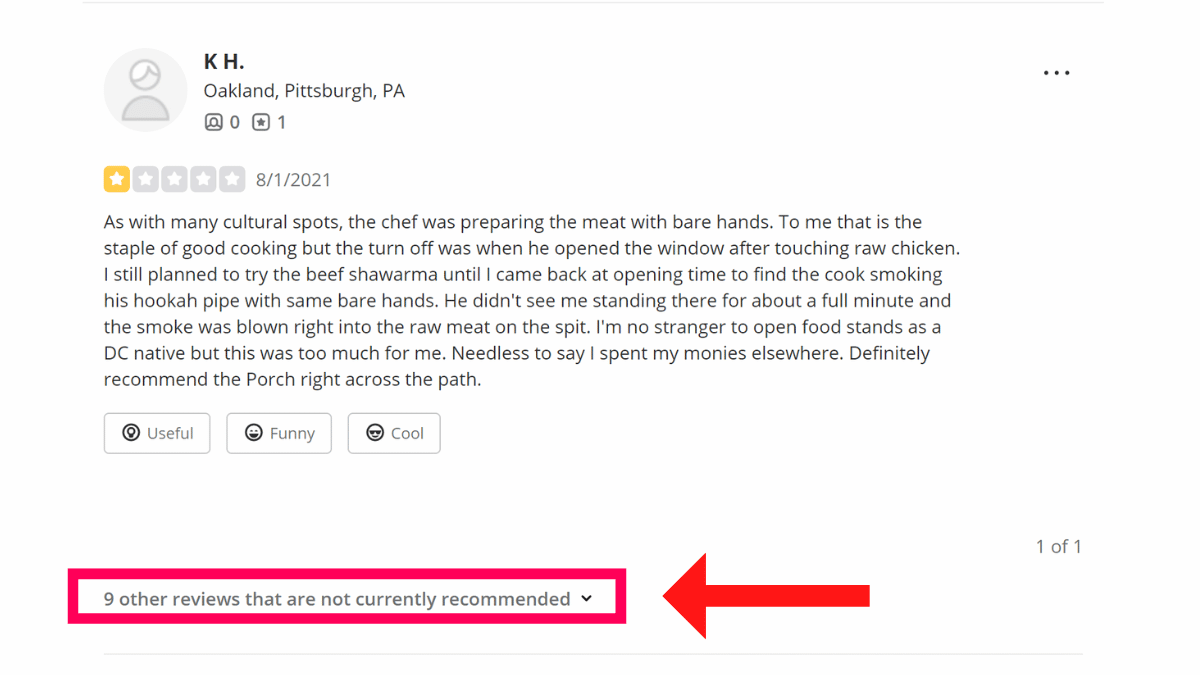 Restoring Your Business on Yelp

With 145 million visitors per month, Yelp has earned a wide range of audiences. Unfortunately, it is not a piece of cake to repair your rating on Yelp.

Also, there is no hard and fast rule to identify whether a review is authentic or fabricated. However, be it a small venture or a large organization, sliding profits is essential, and for that, one needs to sort out the difference between real and fake reviews.

To get more positive reviews on Yelp, business owners need to develop a proactive review request strategy. This can entail emailing customers who recently visited with a link to your Yelp business page, adding their review widget to your website or email, and asking happy customers to share their experiences.

Without a review management strategy, you will be leaving your Yelp rating to chance. Leaving your company to receive a review only when a customer has had a negative emotional experience.

To learn more about how to manage Yelp reviews or speak with a review specialist, call us today at 855-750-0583.

How to Handle Negative Reviews?

Being on the receiving end of critical feedback is disappointing. However, one should handle the bad Yelp reviews by looking at them as a constructive improvement. It is crucial to respond to them with a calm mind and apologize for the customer's dissatisfaction. The response to bad reviews should end on a polite note ascertaining better customer service in the future.

It is natural to slip up sometimes. There can be many reasons like customers over-expecting or cashiers making an honest mistake while billing and anything of that sort. Thus, criticism would boost profit and improve the business, leading to satisfied customers. In hindsight, a page crowded with positive reviews only would also appear to be suspicious and fake. In a way, having a balance in reviews goes a long way. Remember, trust and reputation go hand in hand.

NewReputation has helped hundreds of brands build a better online reputation. To receive a free proposal to remove a negative review from Yelp, contact us today.

Get a Free Quote Today!